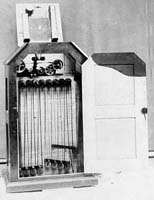 One hundred and nineteen years ago, Thomas Edison patented his first movie camera, called the kinetograph.  This post will be about the history of the device and other events that transpired around its development.  Some multimedia will be featured as well and will include sources from around the internet  Enjoy!

From the Library of Congress

The concept of moving images as entertainment was not a new one by the latter part of the 19th century. Magic lanterns and other devices had been employed in popular entertainment for generations. Magic lanterns used glass slides with images which were projected. The use of levers and other contrivances made these images “move”. Another mechanism called a Phenakistiscope consisted of a disc with images of successive phases of movement on it which could be spun to simulate movement. Additionally, there was the Zoopraxiscope, developed by photographer Eadweard Muybridge in 1879, which projected a series of images in successive phases of movement. These images were obtained through the use of multiple cameras. The invention of a camera in the Edison laboratories capable of recording successive images in a single camera was a more practical, cost-effective breakthrough that influenced all subsequent motion picture devices.

While there has been speculation that Edison’s interest in motion pictures began before 1888, the visit of Eadweard Muybridge to the inventor’s laboratory in West Orange in February of that year certainly stimulated Edison’s resolve to invent a motion picture camera. Muybridge proposed that they collaborate and combine the Zoopraxiscope with the Edison phonograph. Although apparently intrigued, Edison decided not to participate in such a partnership, perhaps realizing that the Zoopraxiscope was not a very practical or efficient way of recording motion. In an attempt to protect his future inventions, Edison filed a caveat with the Patents Office on October 17, 1888, describing his ideas for a device which would “do for the eye what the phonograph does for the ear” — record and reproduce objects in motion. Edison called the invention a “Kinetoscope,” using the Greek words “kineto” meaning “movement” and “scopos” meaning “to watch.”

It consisted of an upright wooden cabinet, 18 in. x 27 in. x 4 ft. high, with a peephole with magnifying lenses in the top…Inside the box the film, in a continuous band of approximately 50 feet, was arranged around a series of spools. A large, electrically driven sprocket wheel at the top of the box engaged corresponding sprocket holes punched in the edges of the film, which was thus drawn under the lens at a continuous rate. Beneath the film was an electric lamp, and between the lamp and the film a revolving shutter with a narrow slit. As each frame passed under the lens, the shutter permitted a flash of light so brief that the frame appeared to be frozen. This rapid series of apparently still frames appeared, thanks to the persistence of vision phenomenon, as a moving image. (From Peep Show to Palace, p. 34)

The camera was based on photographic principles discovered by still-photograph pioneers Joseph Nicephone Niepce and Louis Daguerre of France. In 1877, inventor Edward Muybridge developed a primitive form of motion pictures when Leland Stanford, governor of California, invited him to develop photo studies of animals in motion. Muybridge developed an ingenious system for photographing sequential motion, setting up 24 cameras attached to trip wires stretched across a racetrack. As the horse tripped each wire, the shutters snapped. The resulting series of photos could be projected as something resembling a motion picture. This breakthrough in the early 1870s inspired another student of animal motion, Etienne Jules Marey of France, to develop in 1882 a rotating camera rather like a rifle, where different pictures were taken in a rapid sequence by a rotating cartridge.

From Filmreference.com (Lots of great information)

By the late 1880s numerous scientists and inventors from around the world were working to develop a camera that could record motion. In 1891 American inventor Thomas A. Edison (1847–1931) applied for a patent for a motion picture system developed primarily by his laboratory assistant, William Kennedy Laurie (W. K. L.) Dickson (1860–1935). The system featured a camera called the Kinetograph (from the Greek for “motion recorder”) and a viewer called the Kinetoscope (from the Greek for “motion viewer”). The Kinetograph used flexible celluloid film that had been introduced to the market in 1889 by American businessman and entrepreneur George Eastman (1854–1932). Dickson and Edison included an intermittent mechanism in the camera so that each frame would stop before the lens long enough for the shutter to open and expose the film, and perforations were added to the filmstrip to ensure that the film would be advanced by regular intervals. The intermittent, or stop-motion, device and the perforations in the filmstrip were essential components of the motion picture camera, because without the ability to stop the film the images would be blurred. An intermittent device was first used by Marey in 1888, and stop-motion mechanisms ultimately became a standard element in both cameras and projectors. The perforations in the film made it possible for a clawed gear to hook on to the film and pull it in front of the lens, one frame at a time, ensuring synchronization of the filmstrip and shutter. This technology is still used in modern motion picture cameras.

Here is an article from the The Manufacturer and Builder newspaper.   Begins at the bottom left.

Here is a PDF of an issue from the Pittsburg Dispatch, May 29, 1891, talking about Edison’s machine.  Article is titled, “Work of the Wizard.”

Another PDF, this time from The Salt Lake Herald, also from May 29, 1891.  Article is titled. “The Kinetograph.”

One last PDF, from The St. Paul Daily, April 8, 1894.  Article is titled, “Edison’s Latest Invention: The Kinetoscope and the Marvels it Accomplishes.”

To read a lot more newspaper articles relating to the Kinetograph, click here.  It’s a link to the Library of Congress’ Chronicling America website, with “Kinetograph” as a search result.

Next, I will provide some links to actual film fragments created using the machine, which are located at the Library of Congress website.  Links to the videos in multiple formats will be on the page.

And lastly, a link to the Wikipedia article with a lot of great information.