The Tulsa Race Riot of 1921: A Tragic Massacre Suppressed in History

The Tulsa Race Riot of 1921 is one of the more large scale, racially motivated conflicts that happened during this time period. Unfortunately, this event is rarely mentioned in history books, and even less frequent in the classroom. In what should be labeled the Tulsa Massacre, the number of casualties ranges from the official death count of 39 to over 300. Ten thousand African Americans were left homeless, 1,256 residences and businesses were burned down, and 35 entire city blocks were destroyed.

From the Wiki article, “Sometime around or after 4 p.m., 19-year-old Dick Rowland, a black shoeshiner employed at a Main Street shine parlor, entered the only elevator of the nearby Drexel Building, at 319 South Main Street, to use the top-floor restroom, which was restricted to blacks. He encountered Sarah Page, the 17-year-old white elevator operator who was on duty. The two likely knew each other at least by sight, as this building was the only one nearby with a washroom that Rowland had express permission to use, and the elevator operated by Page was the only one in the building. A clerk at Renberg’s, a clothing store located on the first floor of the Drexel, heard what sounded like a woman’s scream and saw a young black man rushing from the building. The clerk went to the elevator and found Page in what he said was a distraught state. Thinking she had been assaulted, he summoned the authorities.”

On the morning of May 31, 1921, Rowland was arrested on assault charges (which later evolved into statutory rape) and taken to a secure jail on the top floor of the Tulsa County Courthouse after receiving an anonymous phone call threatening Rowland’s life. According to the Wiki page, newspaper coverage began immediately after the arrest, headlining the paper with “Nab Negro for Attacking Girl In an Elevator.”

The Tulsa Tribune has no original copies of that issue and the relevant page is still missing in the microfilm copy. Regardless of the truth of this headline, newspapers from Chronicling America, like this one, use language that can only be considered racist and defamatory.

After the Tribune was released to the public at around 3pm, news soon spread of a potential lynching, prompting hundreds of white people to congregate around the Tulsa County Courthouse where Rowland was being held. Luckily, Sheriff Willard M. McCullough, “was determined to prevent another lynching and turned the men away,” (Wiki).

A large number of people of the Tulsa black community, who were segregated to the Greenwood Avenue district, took up arms and went to the courthouse to ensure that Rowland would not be lynched. This, in turn, sparked as many as 2,000 white men to arm themselves with their own guns and other weapons. Local stores and houses were looted for weapons, ammunition, and anything they could get their hands on. 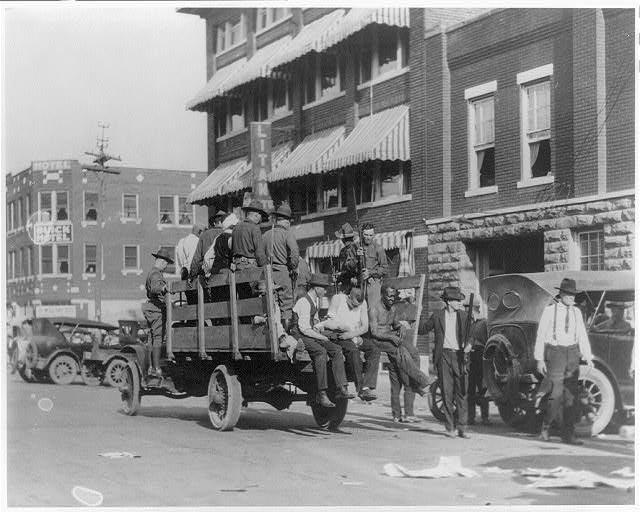 According to the official report, a white man approached a black man during the standoff at the courthouse and demanded that he turn over his pistol, he refused, and the white man tried to disarm him physically. The gun went off and the riot began, leaving ten white and two black people dead within the first few seconds.

Over the course of 24 hours, 35 entire city blocks were strategically burnt to the ground after being looted and searched. Reports state that the fire department was not allowed to stop fires in Greenwood, also known as the Black Wall Street, until after they were already burnt down or threatened a white-owned home. The National Guard was eventually called in.

The aftermath created a indistinguishable smudge in the history of Tulsa, and many accounts are based only on personal accounts due to the suppression of the event both publicly and privately. So much of this tragedy has been suppressed throughout history that it is best to research on Google, local and state historical societies, historic newspapers, etc., in order to gain an unbiased perspective. The Greenwood Cultural Center has some informative resources and first-hand accounts from survivors. 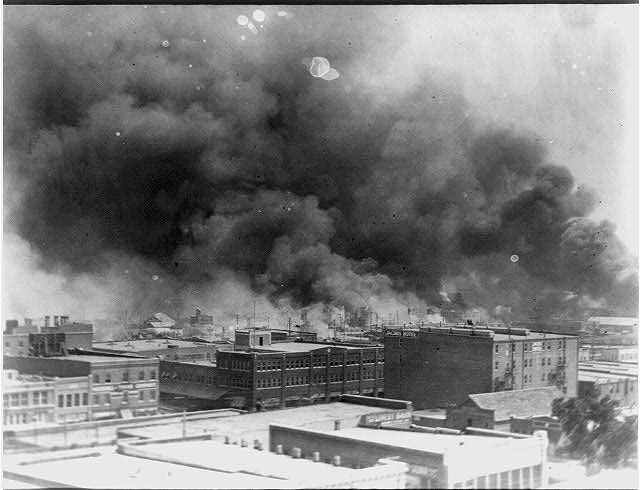 Chronicling America has some great resources surrounding the Tulsa Race Riot that you can find here. The event was largely portrayed in newspapers at the time as escalated by the African American population, though historical accounts point to an orchestrated attack from the Klu Klux Klan, as there was over 3,000 active KKK members in Tulsa alone.

The NAACP also has a small photo collection at the Library of Congress that can be accessed here.

The Tulsa Race Riot is a formidable teaching moment for students who are learning about the Great Depression and the aftermath of World War I, racial segregation, racism, and the economic tension between blacks and whites during this time period.

Since there is a number of historical newspapers surrounding the event, students are engage with text to help with literacy as well as critical thinking and analysis of facts surrounding the language and journalistic style of the time.

Keep in mind: Many of the newspapers use sensationalized and often racist language, which can be offensive. However, when looking at primary sources, a good exercise is to ensure students are aware of just how prevalent racial tension was in the media during the time. How does this reflect media bias in today’s age?

If you are looking to teach about other racially charged events during this time period, there were many race riots during this time after World War I, including what is known as the Red Summer of 1919, in which more than three dozens cities in the US experienced the tipping point of racial tension, including in cities like Chicago, Washington, D.C., and Elaine, Arkansas. There are a large number of primary sources on the Library of Congress and Chronicling America for each of these events. Check out some of the resources below for help in your research.