Robert Smalls and the Heroes of the Colored Race

Each of these people had an enormous impact in history and on the civil rights movement both during and after the Civil War in particular. The last name mentioned on the bibliographic page is Robert Smalls, who was a ship’s pilot, sea captain and politician. He is pictured on the bottom left of the image. His story is so interesting that he is the focus of this Primary Source Spotlight.

Robert Smalls was born on April 5, 1839 and lived until February 23, 1915. Born in Beaufort, South Carolina, he worked as a house slave until the age of 12 when he was sent to Charleston to work as a ship rigger and sailor, only to send all of the prophets back to his slave owner John K. McKee. When Smalls turned 18 he negotiated with McKee to enable him to save $15 of his monthly pay, which eventually allowed him to buy his wife and daughter from McKee for $800. 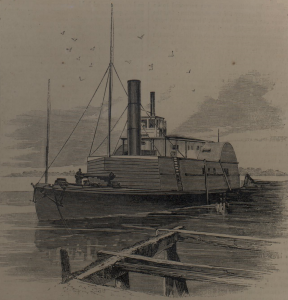 At 23 years old he was working on the docks for a Confederate warship known as The Planter, which was assigned the job of delivering armaments to other Confederate forts. On the morning of May 12, 1862, the white crew of The Planter decided to stay ashore for the night, leaving Smalls in charge of keeping an eye on the ship. Seizing his opportunity to escape on the very early morning of May 13, 1862, Smalls and seven enslaved crewmen rounded up their families and commandeered the ship, sailing it to a blockade of Union ships, ensuring all of their freedom.

Smalls disguised himself as a captain and mimicked the white captain’s movements, passing four Confederate checkpoints, Castle Pinckney, Fort Ripley, Fort Johnson, and Fort Sumter. As he passed through each of the checkpoints he gave the correct whistle signals that he learned from working on the ship and from a Confederate Code book left onboard. He passed each of the checkpoint undetected. As he approached the Union blockade he raised the white flag of surrender. Standing at attention while Union soldiers boarded the heavily armed Planter, Smalls saluted the officers saying,

I am delivering this war material, including these cannons, and I think Uncle Abraham Lincoln can put them to good use.

President Abraham Lincoln awarded Smalls and his crewmen prize money for The Planter – $1,500 was Small’s share, which is $37,000 adjusted for 2015 dollars. Smalls was given the opportunity to personally meet with Lincoln and provide his own story of the event. Lincoln asked why Smalls had captured The Planter, to which he replied simply, “Freedom.” He used the money he received to buy the house in which he had once been a slave and moved his family in. 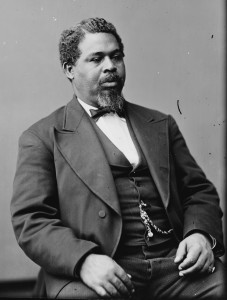 Robert Smalls proved to be a valuable asset to the Union Navy during the Civil War. His courage became key evidence for the argument of allowing African Americans to serve in the Union Army, paving way for then Secretary of War Edwin Stanton to sign into law the permittance of 5,000 African Americans to enlist at Port Royal. He was said to have personally recruited all of these soldiers.

During December of 1863, Smalls was promoted to Captain of the same vessel he captured from the Confederates, becoming the first African American to do so in the history of the US Navy.

After the Civil War, Smalls spent five terms as a US congressman in South Carolina, first in the House of Representatives and later in the Senate, between 1868 and 1889. Robert smalls was the last Republican to represent South Carolina’s 5th congressional district all the way up until 2010.

He is famously quoted speaking about civil rights,

My race needs no special defense for the past history of them and this country. It proves them to be the equal of any people anywhere. All they need is an equal chance in the battle of life.

Every person and event displayed in the ‘Heroes of the colored race’ primary source could each take up an entire week’s worth of lesson plan (or whole semester!), but focusing on one of the lesser known people, especially with such an interesting and amazing story, is a great way to engage students on a different level. This sole primary source would be great to use for lessons involving the Civil War, Black History Month, Radical Reconstruction, Civil Rights, and Politics in general.