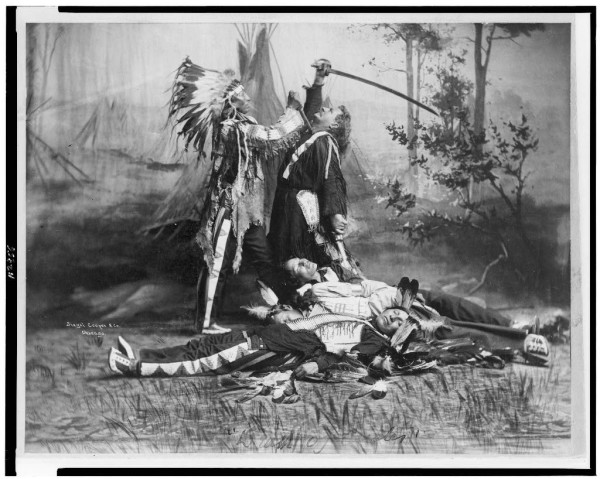 The above photo from the Library of Congress is entitled “Death of Custer” from 1905 From the bibliographic page, “Dramatic portrayal of Native American man stabbing “Custer,” with dead Native Americans lying on ground, in scene by Pawnee Bill’s Wild West Show performers.”

The Battle of Little Bighorn, once called Custer’s Last Stand, happened on June 25-26, 1876, and took place in Big Horn County Montana near the Little Bighorn River.

From the wiki article about the Battle of Little Bighorn, “[t]he fight was an overwhelming victory for the Lakota, Northern Cheyenne, and Arapaho, led by several major war leaders, including Crazy Horse and Chief Gall, inspired by the visions of Sitting Bull (Tȟatȟáŋka Íyotake). The U.S. 7th Cavalry, including the Custer Battalion, a force of 700 men led by George Armstrong Custer, suffered a severe defeat. Five of the 7th Cavalry’s twelve companies were annihilated; Custer was killed, as were two of his brothers, a nephew, and a brother-in-law. The total U.S. casualty count, including scouts, was 268 dead and 55 injured.”

Buffalo Bill Cody, who was a ride for the Pony Express at age 14, opened his Wild West Show on May 19, 1883 and lasted until 1913. The travelling Wild West Show created a folklore of its own. Touring around the United States and Europe, Buffalo Bill recruited many now-famous frontiersman and women, including Annie Oakley, Wild Bill Hickock, Adam Forepaugh, Calamity Jane, Lillian Smith, Gabriel Dumont, Pawnee Bill, and Sitting Bull himself. The ‘Custer’s Last Stand’ reenactment became one of the staples of the show.

For the decades following the opening of Buffalo Bill’s Wild West Show, dozens of imitators created their own Wild West shows trying to capitalize on the culture of the American West and Bill’s success.

Read more about this at the Center for the American West in Cody, Wyoming.

Because this primary source is both about Buffalo Bill’s Wild West Show and the Battle of Little Bighorn, it can be used for many different topic areas and both can be introductions into one another.

Plus, student’s enjoy forming connections to their local history with big themes in national history. For example, Buffalo Bill Cody is buried in Golden, CO and spent a number of years in Cody, Wyoming. By introducing students to these unique events in history is a great way to integrate curriculum that is typically included on statewide tests, like the Indian Reorganization Act of 1934, modernism, the Civil War, etc.